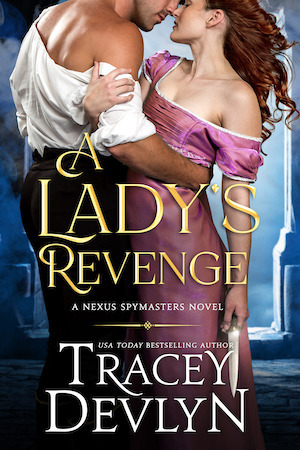 Buy Direct from Tracey's Bookshop (and save!)

Her life is a finely honed weapon of artifice, a dagger pointed at the heart of France. Now, her country demands she risk not only her life, but her heart.

Secret service agent Cora deBeau has stayed one step ahead of Napoleon’s intelligence network until someone within the British Alien Office reveals her allegiance to the Crown. Trapped in a French prison, her mission grinds to a halt, as does her search for her parents’ murderer. Then Guy Trevelyan appears. Unfortunately, her savior may also be the instrument of her destruction…

The Earl of Helsford has demons of his own, where the price of one mistake can follow a spy for the rest of his life. Guy’s lifelong friendship with Cora has morphed into something new and tenuous, but she’s determined to protect his good name at the expense of her own happiness.

As the two spies struggle to confront their desire for each other, Cora’s former adversary crosses an ocean to settle an old score. But Cora isn’t his only mission, and she and Guy must wield every talent they possess to stop him before he destroys the one weapon that could end Napoleon’s bloody march toward England.

PRAISE FOR A LADY’S REVENGE

“Devlyn debuts with an intense spy thriller that hooks readers from the first page…Devlyn makes a unique mark on the genre with her powerful prose and a gripping vengeance theme.” ~ RT Book Reviews

“A sensuous Regency debut…Devlyn reveals the darkness of the spy game and entices readers with a talented and determined heroine.” ~ Publishers Weekly

“A Lady’s Revenge has amazingly intense characters that you will adore from the very beginning…such an emotional and heart wrenching novel with a plot that was very intriguing and delightfully suspenseful.” ~ The Romance Reviews, Top Pick

“This talented author will have readers eagerly waiting for the second installment in her Nexus spy series, which will appeal to fans of Andrea Pickens and other action-based historicals.”  ~ Amy Alessio, Booklist

“I recommend this [A Lady's Revenge] for readers of romantic suspense, historical fiction and for readers who dare to read something a little outside their comfort zone.”  ~ Lynne Wall, Librarian at Aurora Public Library

“Tracey Devlyn blends danger with passion to create a powerful love story that will endure in your memory.”  ~ Victoria Gray, author of Destiny

ACHIEVEMENTS FOR A LADY’S REVENGE

2009 1st Place – Put Your Heart in a Book Unpublished Contest