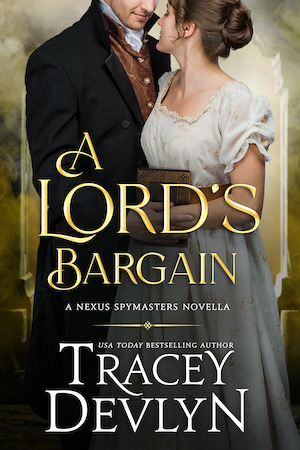 Buy Direct from Tracey's Bookshop (and save!)

A ballroom spy's bleak existence sparks to life after hiring a mysterious governess whose secrets stir his curiosity and whose courage awakens his desire.

Marcus Keene, Lord Shevington, leads a life of idleness and indulgence—or so he would have everyone believe. The illusion he has carefully crafted to protect his country no longer holds the same appeal it once did. His life takes a dramatic turn when a scared and angry five-year-old girl—his daughter—appears on his doorstep. After a long search, he finds the perfect governess in Miss Crawford. One look at Shev and the mysterious young woman refuses the position, igniting his insatiable curiosity.

Anne Crawford has sworn to never work in a bachelor household again, but circumstances force her to accept the handsome marquess’s offer of employment. As she navigates her young charge’s turbulent emotions, Anne struggles to conceal her own and risks exposing a decades’ old secret to the nobleman’s whose every question feels like a forbidden caress.

What Anne does not understand is that mysteries are like catnip to Shev. Irresistible. Much like the governess herself. When a powerful French noblewoman arrives to take his daughter away, Shev is faced with the prospect of an empty home once again and his heart’s desire slipping from his grasp.