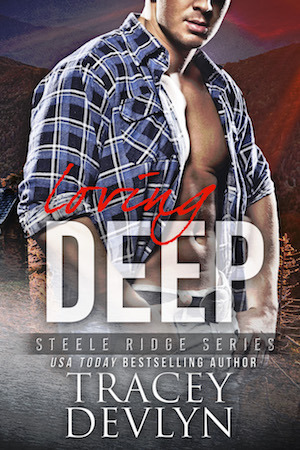 A rough-around-the-edges country boy falls for the one woman who could make his dream come true…or break his heart.

Britt Steele is fiercely protective of what he loves. Even if it means putting his own ambitions aside. He’s worked too hard keeping a red wolf pack from extinction to let some city girl auction off their sanctuary. But Randi is no pushover. He’s watched—and wanted—her from behind a whiskey glass for months. She’s determined, much too tempting, and quickly turning Britt’s attempts at persuasion into seduction. And he’ll need every weapon in the Steele arsenal to change her mind.

Miranda Shepherd’s bar is her passion, but money's flowing out faster than she can pour a drink. To save her business, Randi must sell her family’s land to the highest bidder. One man stands in her way: ruggedly sexy Britt Steele. The definition of strong and silent, Britt’s gruff exterior hides a raw vulnerability she’s aching to explore. Yet Randi knows all about sacrificing for your dreams—and isn’t willing to give up on hers so easily. Still, Britt’s heated caresses are all too convincing.

Some offers are too good to be true. When the buyer's real motive surfaces, Randi and Britt join forces against a ruthless hunter. But protecting the wolves leaves them fighting for their own lives…and their new love.

History of the Red Wolf

Want to learn more about America's precious red wolves? You can find a brief history of their amazing struggle to survive here.

Helpless anger blurred Britt’s vision. He pushed it back and concentrated on diluting their conversation down to a cold-blooded business transaction. No emotion, nothing to lose. “If I add my savings, cabin, property, business, and truck to the money the bank is willing to lend me, I’ll be close—”

“Your cabin and truck? Your business?” she asked, horrified. “Why would you give up everything of value to save Mom’s property? I don’t understand.”

“Because I made her a promise.” And because I am the wolves’ last hope.

“No promise is worth the kind of sacrifice you’re suggesting.”

“Normally, I would agree with you. But, in this case, it is.”

He bolted from his chair, startling her. At the moment, he didn’t care. She was one comment away from leaving, and he couldn’t think of a way to stop her. His mind sparked in a thousand different directions. Staring out the picture window, he saw nothing of the towering cluster of trees or the dilapidated shed. He saw only his reflection, his failure.

If he’d been Grif, he could have charmed her over to his side. Jonah could have waved a wad of cash to win her over. Reid could have…God only knew how, but the devil would have managed the situation. Britt had—nothing. Not a single special quality he could employ.

A light touch on his sleeve brought his attention around to an insanely beautiful pair of green eyes. How many times had he lost himself in their depths? Had wanted her to see him as a man and not just a patron? Had wanted to gather her into his arms and kiss her until they clawed at each other for release?

“There’s something more going on here than a mere promise,” she said in a tone one reserved for wild animals. “Tell me.”

His gaze dipped to her mouth for an aching second before returning to the outdoors. Complete darkness had set in, making their reflection even more pronounced. Impenetrable.

Could he trust her with his most valuable secret?

Could he afford not to at this point?

Barbara hadn’t done so. Wouldn’t a mother confide in her only daughter?

Probably not, given their estrangement.

Dammit, he didn’t want to make an irrevocable mistake. So much rode on the wolves remaining invisible.

He sought her gaze in their reflection. The glass barrier could not disguise her compassion, her strength, her honor. Trust budded through his veins, strengthening with every inch traveled until his spine snapped straight with his resolve.

He took a Mount St. Helens-sized leap of faith.

“An endangered species lives on the property.”

“Isn’t it enough to know one exists?”

“No. North Carolina has nearly fifty species of plants and animals listed as endangered. Due to its pristine nature, I don’t doubt the property contains one or more on the list.”

“If you know this, why consider selling to someone else?”

“Part of the buyer’s mission is wildlife conservation. Seems a good fit to me.”

“There are many levels of wildlife conservation. Many of which your mother did not approve.”

“Then she should have willed the property to you. But she didn’t, so it’s left to me to figure out the best course of action.”

A nugget of hope rattled the cage of Britt’s growing despair. Not many people could recite the number of endangered species in their state. Hell, he only knew because of the research he’d been doing in the last year. So, why would Randi—someone who’d shunned the environment for more than a decade—know such a thing?

“In 1980, the U.S. Fish and Wildlife Service declared the species extinct in the wild. Through a successful reintroduction program, the species has made a small comeback, but none have been known to exist this far west since the late nineties. Until now.”

Randi sucked in a sharp breath. “A canid?”

“Red wolf.” Awe wove between the two short words. She didn’t ask him to confirm or doubt her answer. “A breeding pair?”

“And a litter this year.”

She covered her mouth with shaking hands, then lifted her wonder-filled gaze to his. “Show me.”