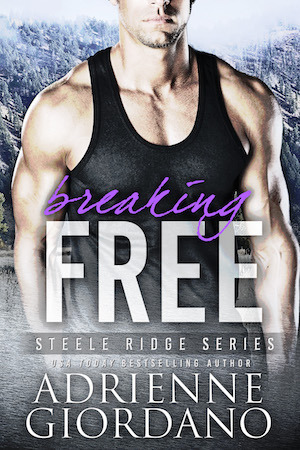 As the black sheep of the Steele brood, Micki Steele craves one thing: the love of her family. Working as a hacker for a ruthless fixer, Micki has done things she'll never be proud of. When she flees Vegas and returns to her hometown, she brings along her boss’s secrets and plenty of danger. At least until he arrives in Steele Ridge, intent on hauling her back to Vegas—or burying her in North Carolina.

Former Green Beret and family friend Gage Barber has been Mr. Fix-It his entire life, but now a war wound leaves him struggling with simple tasks. And when the mysterious and sexy Micki shows up and pulls him into the middle of her family drama, his loyalty to the Steele family is tested. Although he’s sworn off his need to play hero, his undeniable attraction to Micki leaves him with only one option—convincing her to break free of her ruthless boss.

Torn over protecting the man she’s falling love with and her yearning for a normal life, Micki must choose between staying trapped in Vegas or a life of freedom in Steele Ridge. Even if breaking free leads straight to heartbreak…and prison.

Some days life just sucked. And there wasn’t much Micki Steele could do about it.

She sat at her desk in the bland, white-walled, just short of rundown and extremely un-Vegas-like offices of Phil Flynn and Associates staring at Tomas—aka Tommy, T-Man, Tomster, or whatever other nickname she could think of to annoy him.

For the past forty minutes he’d had his feet propped on his desk, one earbud in, listening to an illegally recorded conversation while Micki cruised the local cable company’s network.

This life. She peeped through the window blinds to the street where morning traffic whipped by. With the Strip just blocks away, even on Thanksgiving morning they tended to get high traffic and on days like today, she wouldn’t mind throwing herself in front of a truck or some other large vehicle that could free her from boredom. But in an effort to find the positive in any situation, she reminded herself that in a few hours Phil would be back from Mexico and she and Tommy would be sitting at his dining room table stuffing themselves with a feast fit for royalty. One thing about Phil, he didn’t skimp on special occasions.

She gave up on the blinds and looked back at Tomster. “Anything?”

He shook his head and Micki managed to stifle her sigh.

Sure as hell burned hot, if they didn’t get some kind of valuable information their boss could blackmail a judge with, Phil would not be happy.

A familiar sickness roiled inside. If Phil was here, he’d look at her with those hyper-focused eyes that screamed of death one minute and the next could soften like a baby’s rear. All of it made her skin itch. Ten years she’d been playing this game with him. The anxiety, the drama, the aggravation. The special meals at his house, the latest-greatest electronics for her to play with, the birthday parties in her honor. It all added up to one monster game of love-hate she couldn’t do a thing about.

Well, sitting around feeling sorry for herself wouldn’t stave off Phil’s pissiness.

She swiveled back to her laptop and sent her fingers flying across her keyboard. “I’ll check his bank records again. Phil thinks this guy is taking payoffs and he’s usually right about that stuff. There has to be something there.”

“Go ahead. I’ll be here. Listening to him have phone sex with his twenty-year-old assistant.”

Micki made an ick face. “Ew. I’m glad it’s you listening and not me.”

Tommy propped his hands behind his head. “According to the shorty, he’s being a very bad boy.”

Then he flashed the smile that had opened all sorts of doors—and windows—for him.

At thirty-two, Tommy had reached that age where boyish good looks collided with maturity. His Hispanic heritage had blessed him with olive skin, inky black hair, and soft brown eyes that could turn hard in seconds.

Over the past ten years, he’d become her adopted brother and she’d seen women swoon over him thousands of times. Women were drawn to Tommy and he made it work for him. Personally and professionally.

His cell phone rang and he leaned in to check the screen, rolling his bottom lip out. At the second ring, he yanked his earbud free, replacing it with his phone.

Whatever it was, it was important enough for him to dump the judge. Micki went back to her laptop, where their target’s deposits for the past twelve months appeared in front of her.

A sudden sheen of sweat pebbled his perfect forehead.

With the tasks they performed, Tommy suddenly looking like a crack addict in need of his next fix didn’t happen a lot, and the buhm, buhm, buhm of her heartbeat echoed in her head.

Tommy flipped a page on his notepad, scrawling notes as he bit down on his lip. The lips were always the tell. Not much rattled Tommy, but when it did, his lips got active.

“Three o’clock?” Tommy checked his watch. “I can do that.” He punched off the call and met Micki’s gaze. “Big problem.”

Tomas smacked his desk drawer open, grabbed his keys and wallet, and hopped up. “Phil got pinched in Mexico.”