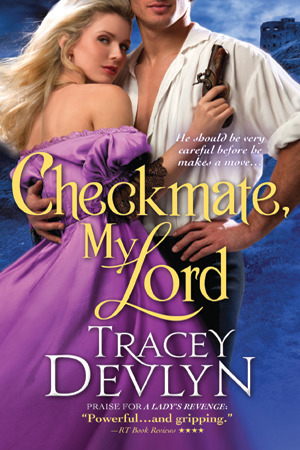 A desperate mother falls in love with the spymaster she’s forced to betray.

Spymaster Sebastian Danvers, Lord Somerton, has spent the last decade protecting England’s shores against a French invasion. Known for his cold logic and ability to sacrifice anything for the greater good, few can outwit him and even fewer dare challenge him. Until now. After being exiled to his country estate, Sebastian is surprised when his beautiful, no-nonsense neighbor turns her seductive wiles on him. But years of intrigue have left him wondering why a respectable widow would risk scandal for a few nights in his bed. Sebastian takes his time unraveling the widow’s secrets, for he quickly realizes she might be the one sacrifice he is unwilling to make.

Catherine Ashcroft spends her days doing little more than caring for her precocious seven-year-old daughter and negotiating her neighbors’ various complaints against their absentee landowner, the enigmatic Earl of Somerton. Catherine’s orderly existence soon upends and she now finds herself in a desperate bid to save her daughter’s life. Catherine succumbs to the earl’s passionate kisses and recognizes the same loneliness she has felt for years lurking in his hard, crystalline eyes. As the earl’s enemies close in, will Catherine be able to save both her beloved daughter and the handsome spy who has stolen her heart?

“Spies, adventure, risk, high stakes attraction – CHECKMATE MY LORD is a compelling read that will keep you turning pages way past midnight.”
~ Anna Campbell, author of SEVEN NIGHTS IN A ROGUE’S BED

“This novel was like chocolate for me–I loved it and consumed it quickly. I can’t wait for Tracey Devlyn’s next exciting tale of danger, daring and love!”
~ Brenda Novak, New York Times bestselling author

Praise for Checkmate, My Lord

“Devlyn’s seamless writing will entice readers and keep them eager for the next installment.” ~ Publishers Weekly, STARRED review

“Devlyn’s edgy and sexy series is gaining momentum, and historical-romantic suspense fans, particularly those who enjoy Brenda Joyce, will delight in this.” ~ Booklist

“Love the characters, lots of mystery, murderers, spies and lots of romance!!!!!!!! CHECKMATE MY LORD is an edge of your seat exciting read!” ~ Fresh Fiction

“Tracey Devlyn’s writing style is compelling and powerful. She taps into the emotions and senses of the reader as she reveals the dark side of human nature as well as the giving, honest, and loving side that overrides the darkness.” ~ Long and Short Reviews

“Devlyn’s second romance thriller, and like her first, it comes with an exciting plot, steamy love scenes, and twists and turns throughout.” ~ Historical Novel Society

“It is a truly enthralling romantic thriller.” ~ All About Romance